page will automatically reload every 60 seconds
new search
... results will appear as you type.
The Walking Dead: A TellTale Games Series 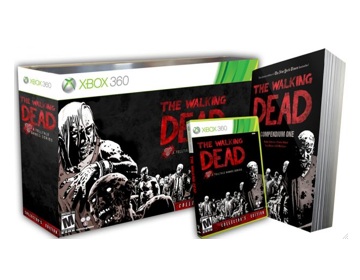 Make every choice like it's your last... The world we knew is gone. The dead have risen to feed on the living. The living cannot be trusted. Starving. Never safe. Looking for hope. What would you do? The Walking Dead is a critically acclaimed adventure horror game set in Robert Kirkman's award-winning universe. Beginning when Deputy Sheriff Rick Grimes is still in a coma, this is a new story telling the tale of Lee Everett - a man given a second chance at life in a world of the undead. Taking an orphaned girl under his wing, Lee must deal with true horror under the constant threat of walkers hungry for flesh... as well as other survivors, desperate enough to do anything to stay alive. Featuring cover art exclusive to the Collector's Edition, this is the first 48 issues of the fan-favorite, New York Times Best Seller series collected into one massive paperback collection! Over one thousand pages chronicle the beginning of Robert Kirkman's Eisner Award-winning continuing story of survival horror- from Rick Grimes waking up alone in hospital, to him and his family seeking solace on Hershel's farm, and the controversial introduction of Woodbury despot: The Governor.

Check the latest status of the The Walking Dead: A TellTale Games Series here on this page. If it's not available, click "follow". We'll do the rest.